The US Air Force Thunderbirds will perform the flyover prior to the 104th running of the Indianapolis 500 on Sunday. The unit is normally not available to do the flyover for the race on Memorial Day weekend, “It’s a unique opportunity because it’s August,” Speedway president Doug Boles said in a news conference this morning. The pre race will likely include the traditional singing of “(Back Home again in) Indiana” by Jim Cornelison and have many, but not all of the usual festivities.

Letter from Boles in Program

In the 2020 program, which shipped this morning to those who pre-ordered it online, Doug Boles wrote the following letter: 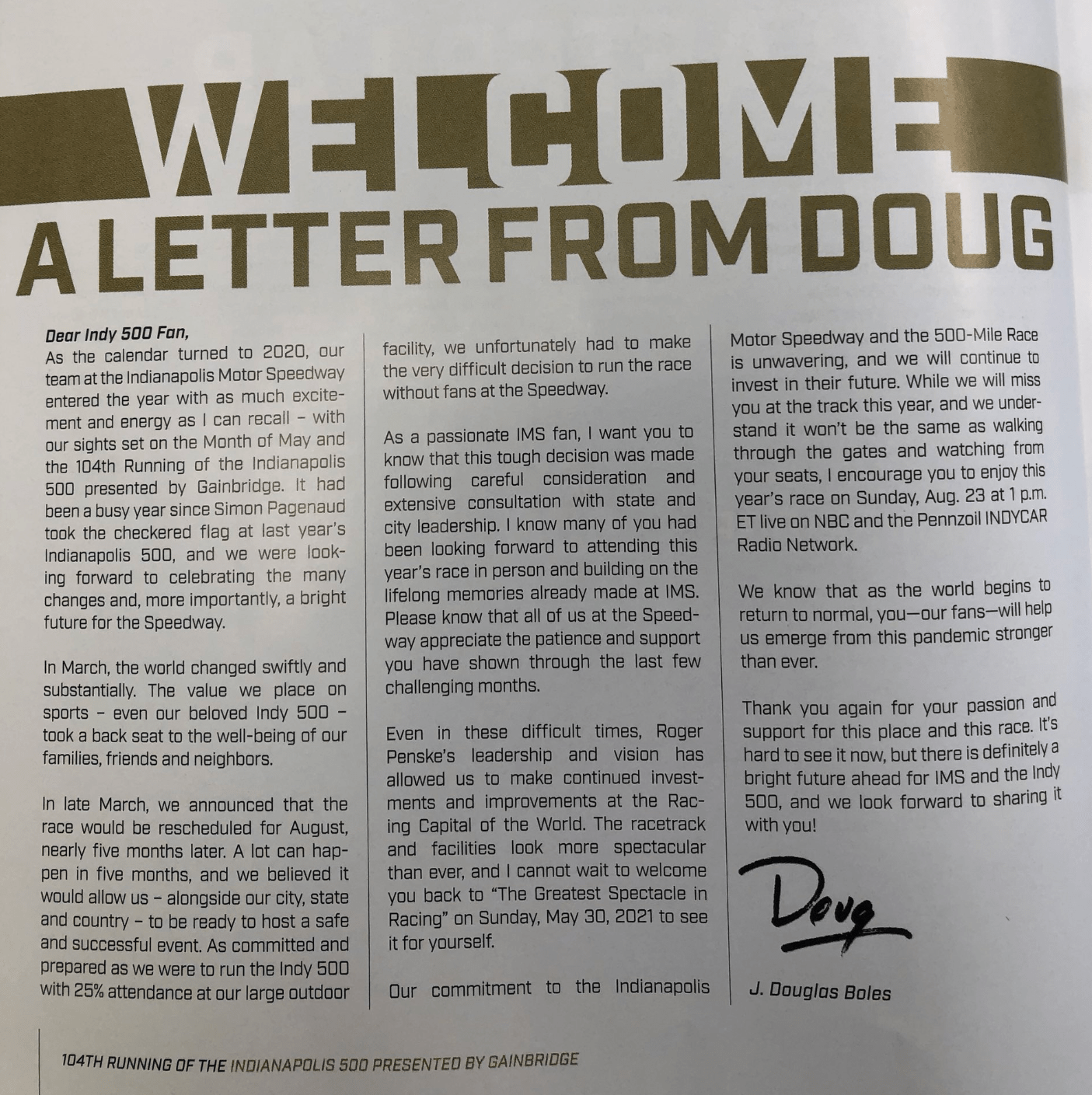 As Mark  Miles said in today’s briefing, not allowing fans was strictly the Speedway’s decision after consulting with state and local health officials. No one told IMS they could not have fans.

The media  briefing featured Boles, Mark Miles and Jay Frye. Boles heaped praise on Roger Penske, saying that the past few months have been an emotional roller coaster.”I don’t know how we could have gotten through this without the leadership of Roger Penske,” Boles said. He also said the facility looks 30-50 years younger.

Miles said he hopes to release the 2021 schedule by the end of September. Indycar is looking to run the postponed Mid Ohio race the second weekend in September, Miles said.

“The race is something we feel we have to keep up. It’s important to our stakeholders,” Miles said. He added that the series is in good shape. Miles said that navigating through the pandemic has taught the series leadership to be more agile and flexible.

Frye believes having two oval races before the 500 helped reduce incidents on track. He said the series has every intention of sticking to their plan although the pandemic may alter the timeline a bit. Frye continues to be optimistic about a third OEM.

My impressions from the briefing is that the series and the Speedway are still in good shape and optimistic about the future. All three principals agree that Roger Penske is the glue that held everything together during these difficult months, not only with his business decisions but also by providing emotional support. While Penske’s purchase of the Speedway and the series may seem like it happened at a bad time for the penske Entertainment group, it could not have happened at a better time for IMS, the NTT Indycar Series, and the fans.