It was a life full of irony. Stirling Moss could have won the F1 World Championship seven consecutive years. Circumstances got in the way. He had to compete against Fangio. His sense of sportsmanship cost him a title. Miscommunication with the pits cost him another. Today is a sad day with his passing.  On the other hand, for a driver of that dangerous racing era to live to 90 years is amazing.  Moss was one of my first racing heroes. Like Dan Gurney, he excelled in several forms of motorsport. Moss survived broken legs, an accident that put him in a coma for a month, and a fall down an elevator shaft at his home a few years ago. Only A. J. Foyt has survived more perils.

Moss had the unfortunate luck of driving at the same time as Juan Manuel Fangio, the five time world champion. Yet, one could argue that Moss was the most consistent driver over a seven year period. He finished second in the Formula 1 standings four straight years from 1955 through 1958. From 1959 through 1961 he finished third. Still today Moss is considered the greatest driver to never win the World Championship.

1955 may have been Moss’s best year. He won his first F1 race at the British Grand Prix at Aintree in a Mercedes. He also won the Targa Florio and the Mille Miglia, two grueling road races. His prowess in endurance  racing was unparalleled at the time. He had already earned a runner-up spot at Le Mans and won the 1954 Sebring 12 Hour race, the first non American to do so.

Moss will always be remembered for his sense of sportsmanship. In 1958 Moss lost the F1 title, by a point after convincing the stewards to reverse a penalty against Mike Hawthorne in the Portugese Grand Prix. The points restored to Hawthorn turned out to be enough to give Hawthorn the crown.

I find it difficult to say goodbye to one of my early racing heroes, but there are still many legends left. We still have Mario Andretti, A. J. Foyt, the Unsers, and Johnny Rutherford with us.  Moss and Bill Vukovich were my first two heroes who were driving after I was born.

I will close with one of my favorite photos of Moss at the wheel. 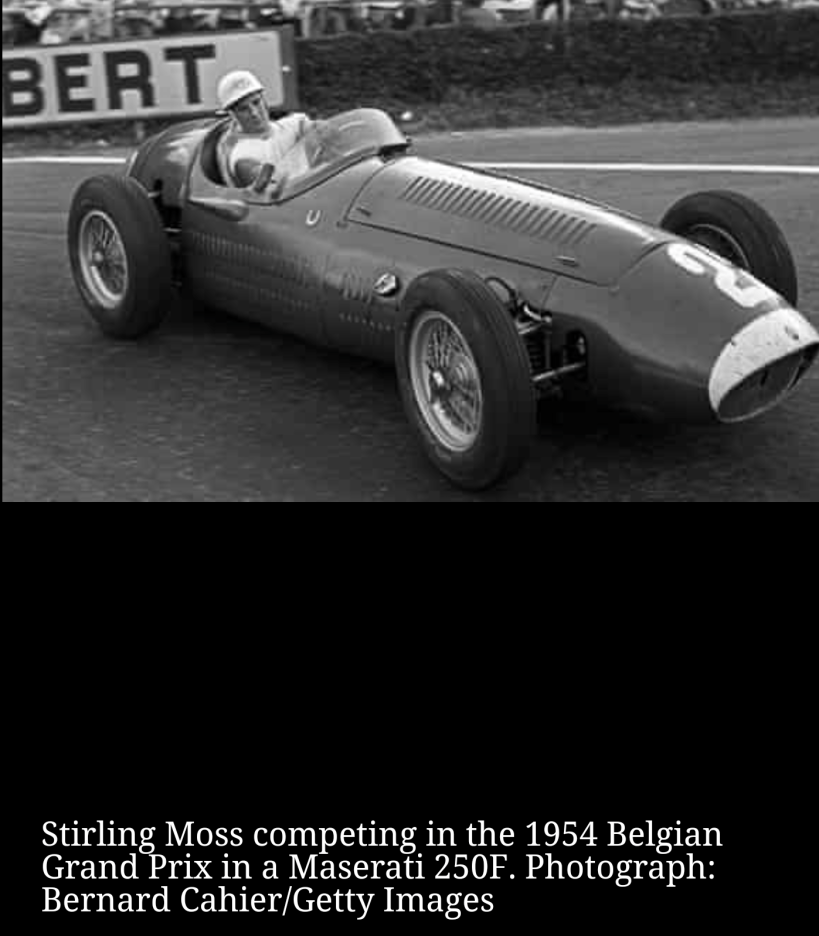