First, it was great to back at a race track. Watching cars speed by was good therapy. What I found even better was getting to see friends I would have seen months ago under normal circumstances. The world was right again for a day. In addition to the changes Road America has made for the fans’ health, there are also physical improvements to the facility.

The main photo is the new viewing terrace on the inside of Canada Corner. This four tier area should relieve some of the congestion on the trail. I tried it for a bit. It presents a nice view of a great corner.

The biggest structural improvement is to the concession stand near the paddock. The area had been a crowded jumble of people, picnic tables, and golf cart parking confusion. Now, the entrance is elevated, the building remodeled, and carts can’t park right up to the dining area. 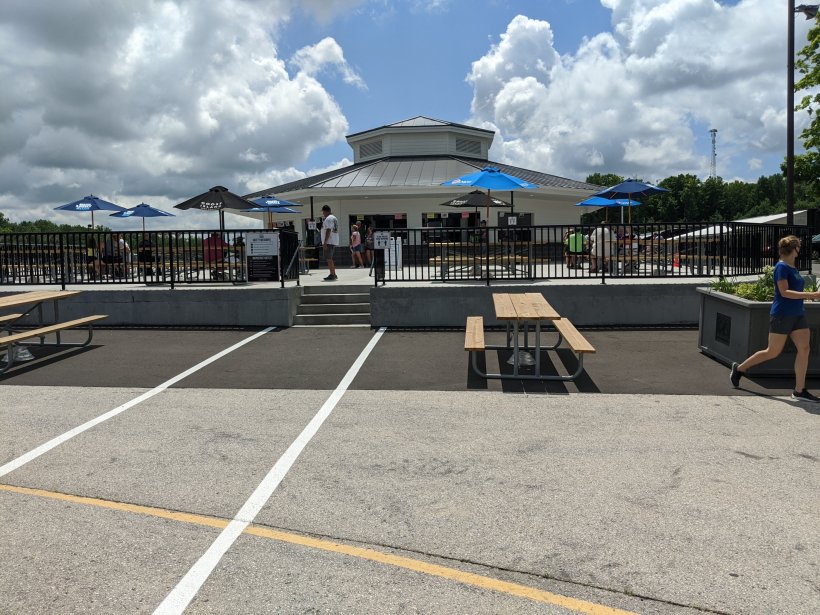 The paddock had a different feel to it. It sat empty until about 4 pm when the transporters began arriving. Seeing the trucks pull in and lineup was exciting. It meant there will be racing tomorrow. The Honda teams are toward turn 14 and the Chevy teams are toward turn 1. Until the transporters arrived, it was sad seeing an empty expanse of concrete that normally is buzzing with activity.

The crowd was small enough that fans could keep distance from each other. I expect a few more people the next two days. It was a smaller crowd than most days at Road America. Masks seemed to more prevalent this afternoon. I talked to some people who arrived later in the day. They did receive a mask and hand sanitizer. I think I enter a different gate tomorrow.

Indycar has released a spotter’s guide for each race this weekend. The only car changing liveries is the 15 of Graham Rahal.  I will have those posted no later than tomorrow morning.