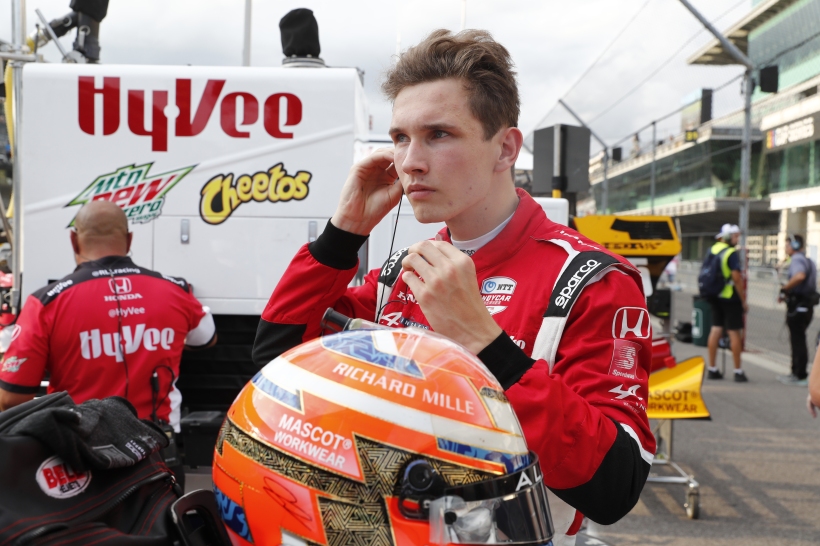 Christian Lundgaard had just a few hours to get a taste of Indycar last August, but it was enough to set him on a path for a full time ride in the series. Luindgaard and team owner Bobby Rahal talked about the differences between Indycar and Formula 1, and why they think Indycar presents greater opportunities for younger drivers.

He told the media this morning after Rahal Letterman Lanigan Racing announced Lundgaard as the 2022 driver of car 30,

“In the end it actually came down to what do I personally
want and what will I enjoy, and for me when I did the race
over here, that’s what I enjoyed the most. I haven’t
enjoyed a race weekend as much as that one for years,
except obviously when you have a very good weekend in
whatever you’re doing and you are winning and
dominating. . .
Over here it’s pure racing. I like the racing over here.
Yeah, that’s what attracts me and the racing itself, so I’m
definitely positive for next year.”

Lundgaard understands the challenges he faces on ovals, but is eager to run on them. He counts on his experienced teammates, graham Rahal and Jack Harvey, to help him. LKundgaard appreciates Indycar’s oval history.

“…when I think about INDYCAR, I think about the Indy 500. When you’re
sitting at home and someone mentions INDYCAR, you
think of the oval tracks, so you know what comes with it.
I think the road courses I know. I know how to drive
around a road course, but the ovals will definitely be a
challenge.
I think it’s something that I will have to prepare as much as
I can on. I think it’s great to have Graham and Jack with
me. They’ve got the experience. The team has got the
experience on the oval tracks, so I think for me, it’s about
taking it step by step, but at the same time trying to see
how much I can learn before getting on to the track.
And I’m sure the team has got everything ready for me.”

Lundgaard explained the difference between Formula 1 and Indycar and why he is taking thuis direction.

“INDYCAR is a series where they do this Indy 500, they do
ovals. It’s very mixed. It’s a mix of street circuits, road
courses, ovals. It’s such a big mix, where you have
European tracks, they’re nice and smooth, big runoffs.
Specifically in F1 you’ve got some are faster than others
and you’ve got to be in the right car to be able to win.
Looking at Romain, he came over here and he started
winning and performing. I never doubted that he was a
good driver even in F1 because I know Kevin as well and
he was his teammate and they were fighting each other
because that’s the only thing I could do. Over here
everyone fights everyone. Everyone has an opportunity to
win. That’s what racing stands for.
So for me to come over here, I know once I jump in the car
I’ve got an opportunity to win no matter which track I’m at,
and that’s what racing is, and that’s why I’m here.”

Rahal was asked why he thinks young European drivers ould be attracted to Indycar.

” Well, first off, I think INDYCAR is what
Formula 1 used to be, to a large degree. Clearly we don’t
have the politics. Clearly we don’t — there’s a lot of things
that don’t exist in the INDYCAR paddock that exist in the
Formula 1 paddock.
You look at how many really good guys are in F2 who
maybe are frustrated now because they can’t make that
next step, and yet they’ve kind of proven their abilities.
As Christian mentioned, I think that — if I’m a young guy in
Europe and I look at the potentials, I think the potential for
my career is much greater here in INDYCAR than it is
there.”

Lundgaard joins Callum Ilott of Juncos-Hollinger Racing as the first two confirmed rookies for 2022. Young drivers in Europe will watch their progress closely next season. Indycar may be on the verge of another European wave.