That turned out to be a fun race at the end. It was a pretty tame race for Texas.

Josef Newgarden has three wins already this season. No one had more than three wins in 2018.  This puts Newgarden in a great position to win a tiebreaker, although should  Alexander Rossi tie him in wins, Rossi has three second places to date.

If Newgarden wins the championship, Tim Cindric should get a big share of the credit. Another brilliant call to pit on the first yellow worked out and brought the car home first. All three of Newgarden’s wins this year can attributed to pit/tire calls by Cindric.

Rossi had a great save to avoid the Herta-Dixon crash. It likely saved his title hopes.

The high line never came in tonight as it usually does. Rossi lost one of his strengths without that second groove.

Graham Rahal had a quiet race, but ends up third.  Glad to see him finally have a good result in what has been a frustrating season for his team.

Remember when crew members wore short sleeves and no helmets? A serious injury or worse didn’t happen on pit lane tonight because of the mandated safety equipment for crew members. That was a scary crash in Sato’s pit. Glad to see the crewman was okay.

It’s a shame that James Hinchcliffe  crashed. He had the drive of the race going until then.

Colton Herta also had a great run going.   He made some incredible moves. A shame his day ended the way it did.

What can we say about Santino Ferrucci? His fourth place tonight  at Texas gives him  three top tens in the last four races. Ferrucci is now leading the Rookie of the Year standings. He has done this rather quietly.  Ferrucci has improved every week.

Look for my full race report on Wildfire Sports tomorrow.  Next week I take a look at the season at the halfway point.

Note: The  comments above the break were written in real time during qualifying.

Tony Kanaan’s miserable year continues. He brushed the wall on his qualifying lap.

Great first lap by Marco then he looked like he was back on slicks at Detroit last Saturday.

After Spencer Pigot’s run I thought Ed Carpenter would do better.

That is the worst Team Penske qualifying effort I’ve seen in a while.

Anyone who says they knew before the season started that Sato would have two poles is lying. I have said he will be in this title fight all season. Sato is third in bonus points with 7, behind Rossi and Newgarden.

Sato now has 9 career poles.  Ryan Hunter-Reay and  Josef Newgarden each  have 7.

The race will he interesting with Rossi and Will Power starting mid pack.  Keep your on starting spots 8-15 the first stint tomorrow.

I wonder if the Penske cars have better race cars than qualifying cars.

The tire question will be huge tomorrow night, especially late in the race.

Marco can’t catch a break, even with a really good car.

Back tomorrow with Quick Thoughts after the race and a full report Sunday on Wildfire Sports. 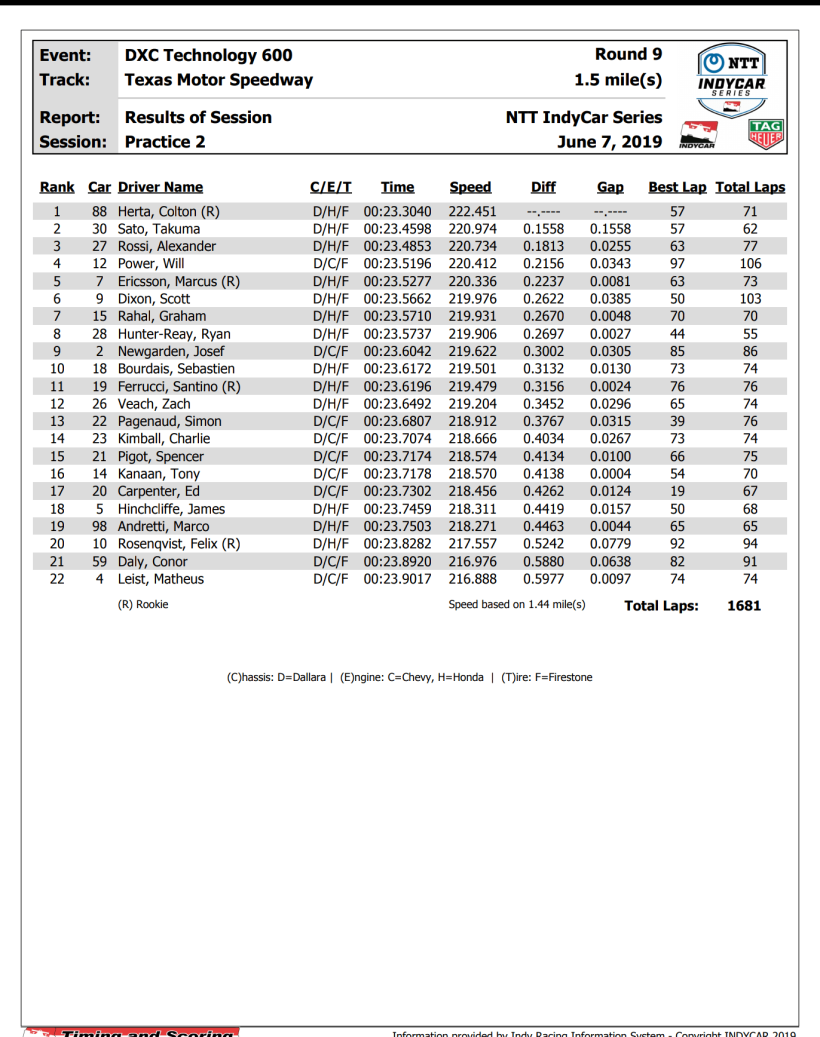 The NTT Indycar series reaches the halfway point of the season with Saturday night’s DXC Technology 600k at Texas Motor Speedway.  The race also ends a grueling five week stretch for the teams and drivers that started May 10 with the Indycar Grand Prix. There is a test at Road America next week, and the race there is June 22-24.

Texas over the years has had horrific crashes and controversy.   In 1997, Billy Boat won the race driving for A. J. Foyt. Arie Luyenduyk confronted Foyt in Victory Lane claiming he had won. Foyt slapped Luyendyk. A review showed that Luyendyk had indeed won. Foyt stil has the trophy. It was the last Indycar race that USAC officiated. Simona de Silvestro was involved in a horrible crash in 2010 and her car came to rest on fire. It took several minutes for the rescue team to reach her car. In 2017, a multi-car wreck which caused a red flag resulted in lots of finger pointing among drivers and teams.

The weekend really began last night with a night practice. The practice also served as test to decide which of two tire compounds cars will use in the race.

Last night’s practice was cut short by rain at about 8:50 EDT. The drivers got about 35 minutes actual practice. the first few minutes were spent practicing pit exit with the two stage limiter in effect for this race.

Scott Dixon was fastest in the short practice session with a lap at 219.3 mph. Today’s schedule: All times Eastern

This weekend’s race could either help drivers close in on points leader Josef Newgarden or put someone too far back to contend the rest of the year.

Since 2011, only three drivers who have won this race went on to win the championship the same season. Scott Dixon has done it three times, last year,  2015, and 2008.  Dario Franchitti won the race and the title in 2011. Helio Castroneves has won four times, and Dixon has three victories.

Conor Daly makes his second start of the season, driving for Carlin Racing. he replaces Max Chilton, who has decided not to drive on the remaining ovals this year.  Daly finished 10th in the Indianapolis 500 driving for Andretti Autosport. He drove for Carlin ‘s GP 3 program in 2011.

In 2016 at Texas Daly was involved in crash with Josef Newgarden. Newgarden was injured but still was able to race at road America two weeks later. The 2016 race was later halted by rain after 78 laps and finished in August.

Four of the last six poles at TMS have been won by a Penske Chevrolet.  Newgarden won the pole last year.  Power, as previously stated, won the pole from 2013-15. Race results for Penske have been mixed, with only two wins in the last six years. The most recent win was by Power in 2017.

With all three Penske drivers fighting for the title,and possibly the win,  the drivers will be taking points from each other, leaving an opening for Dixon or Alexander Rossi to gain ground.

How the Yellows Fall

The outcome of the race usually comes down to when the last yellow flag falls and who survives the attrition this track seems to produce.  A caution with less than ten laps to go will result in cars behind the leader going to the pits for fresh tires. The leader is stuck maintaining his position. His only hope is for a yellow with three laps left.

The rain shortened practice may make tires more of a question mark. this was the only practice that was at the same time of day as the race.  At that, just a few minutes after the green flag time, the rain began.

Firestone brought a different right front in case their first choice blistered.  The hope is that tire wear will be more of a factor this year. it may be another race where the last driver to get fresh tires wins.

At the season’s halfway point, I have a choice. i can get a prediction right or run the table and continue to get them all wrong.  I will try to get at least one right.

Like Detroit last week, this race could be another good day for Dallara. I just hope it is a safe race.

Look for Quick Thoughts after qualifying and the race here and a full race report on Sunday on Wildfire Sports.