Fans packed the stands at Kokomo Speedway and waited patiently as light rain fell.  The rain stopped, the sun appeared,  and the celebration of Bryan Clauson’s life began. The dry window lasted just long enough for the essential part of the program to get in. Bryan’s father, Tim, and his fiancee, Lauren, shared  moving stories. Levi Jones spoke about how much he enjoyed racing against Bryan. Robin Miller told the story he’s told before, how Randy Bernard found a way to get a sprint car driver to the Indianapolis 500. Then the rain began. It was not about to stop this time. The afternoon ended with tornadoes touching down south of the track. Although rain-shortened, the celebration was meaningful to those who were there. I talked to many out of state fans who had come to honor Bryan and stay for the Smackdown weekend.

There was irony in the celebration. It was the one year anniversary of Justin Wilson’s death. Like Justin, Bryan was an organ donor. His organs have saved or improved seven lives. The family has a goal to sign up 2,00 new organ donors. To register, go to RegisterMe.org/Campaign/BryanClauson.

I had planned to stay for the race last evening, but it was obvious that the program would be cancelled. I will make another trip there another time.  The track was a soggy mess when I arrived, and the weather didn’t help. I hope the rest of the weekend’s program can be run. 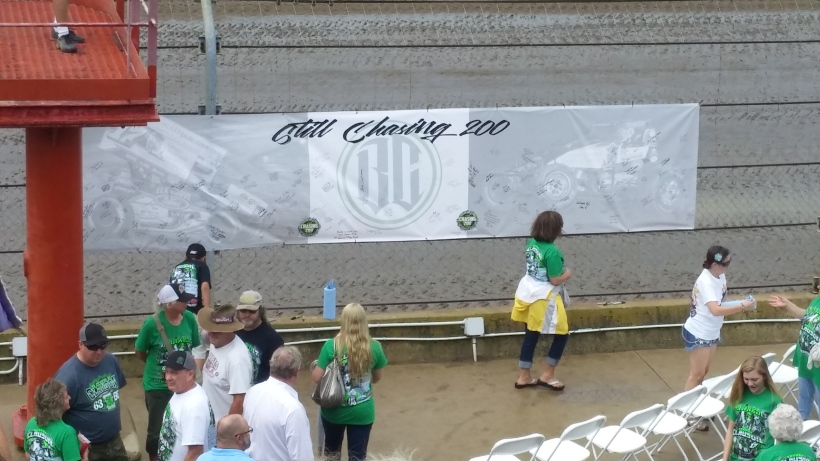 Saturday night Indycar picks up on lap 72 of the rain delayed race at Texas Motor Speedway. James Hinchcliffe will lead the field back to green around 9:30 Eastern Time. The race is on NBCSN. 177 laps remain. The current running order contains some interesting things. The Pocono podium is in spots 2-4. Ryan. Hunter-Reay is second, Mikhail Aleshin third, and Will Power fourth. Points leader Simon Pagenaud is 15th at the moment.

Power could possibly leave Texas as the points leader, but I think he will need to wait until Watkins Glen for that to happen. Other things to watch for:

This is likely Honda’s last chance to get to victory lane this year. They missed a great opportunity at Pocono.

Will pit lane be kind to Helio Castroneves? The accident at Pocono was just one of the many pit woes that have befallen him this year. He has been caught by yellow flags three times and was hit exiting the pits  by Townsend Bell at Indianapolis.

Four things are significant about the schedule release yesterday. First, it was released in August.  This is great for team planning and approaching sponsors, who are just now planning next year’s advertising budgets. Second, the consistency of the same tracks as this year. Third, the consistency of dates. This is the first schedule in a long time with these consistencies.Fourth, adding the oval at Gateway. The 2018 schedule should be similar with one or two additions.

I hope after this year, Phoenix can move to right after Long Beach. that would be a great expense saving for the teams. There is still a late summer gap between Mid-Ohio and Pocono, suitable for adding a race in the west. Mark Miles continues to talk of an early season race overseas.  I’ll believe it when the first car rolls out of the pits for practice wherever it may be.

With Gateway, the schedule has six oval, six natural terrain, and five street circuit races. This is  a perfect mix, one third of the schedule of each type of track. When new tracks are added, I hope Indycar keeps the proportions of track types in mind.  This schedule is the best in a long time.