Mid Ohio is arguably the most crucial race of the year for the championship contenders. The top four contenders each need a win to set up their run in the  final four races.  A  Josef Newgarden win can solidify his lead and make it very difficult on Alexander Rossi, Simon Pagenaud, and Scott Dixon to catch him. Rossi by repeating his victory last year can regain much of what he lost last last Saturday/Sunday in Iowa. Dixon and Pagenaud need to win just to stay within shouting distance.

Sunday will be the 35th Indycar race at Mid Ohio. the first race in 1980 was won by Johnny Rutherford under USAC sanction. The race didn’t return until 1983 and ran through 2003 as a CART event. It then fell off the schedule until the IRL brought it back in 2007. The race survived the merger and has become on of the staple events of the series.

While the track doesn’t always produce the best racing,  last year saw lots of action and passing in the esses. There have been fights for the lead in the last several years. Simon Pagenaud passed Will Power in 2016 in turn 13 with just a few laps to go after some wheel banging. Graham Rahal beat Justin Wilson to turn 5 after a restart in 2015 for an extremely popular victory.

Last year Alexander Rossi was firmly in control while there was was some great action behind him.  Sebastien Bourdais finished sixth after starting 24th, and Pagenaud moved to eighth from 17th on the grid. Rossi led 66 laps in 2018.

Last year was unusual in that pit stops or strategy didn’t ruin anyone’s race. Josef Newgarden was heading for his first win in 2014 when a late call to pit caught him and his team off guard. Newgarden got tangled up with the air hose. The penalty dropped him out of contention. In 2015 Mikhail Aleshin had the race firmly in control when a botched pit stop involving a collision with another car put him out of the running.

Team Penske in 2015 left  Juan Pablo Montoya out too long. He was caught out by a yellow flag, lost a chance to strengthen his points lead which eventually cost him the title. While the frequency of yellows has diminished the last couple years, pitting at the start of the pit window is critical at Mid Ohio.

Contenders Will be Strong

We’re at the time of the year when the contenders for the championship usually dominate.  It seems as if this season that has been the case since the Indycar Grand Prix. I don’t think that changes this weekend.   I look for Rossi to repeat as the winner on Sunday.  He won Mid Ohio and the next race at Pocono in 2018.  Rossi needs to repeat that feat to have a chance to win the title. As for Pagenaud and Dixon, they both almost need to win out and hope Newgarden and Rossi have some misfortune.

R. C. Enerson returns to Indycar for the first time since 2016, driving the number 31 car for Carlin . His Indycar debut was at Mid Ohio for Dale Coyne Racing.  Enerson was impressive in practice that weekend, but struggled in the race.

Colton Herta looks to have a good race and avoid the bad luck that has plagued him too often this season. He should at least get a top 10 finish if the mechanical gremlins don’t get him again.

Can Zach Veach repeat his great showing at Iowa?  He seems to have his best runs in the latter part of the year. This is his home track, so the motivation is there.

Mid Ohio is also the home track for Michael Shank, who returns to the series this weekend with Jack Harvey.  This is the eighth race of the team’s 10 race schedule this season. Harvey did well early in the year when the team ran the first six races. After Mid Ohio, the team will be at Portland and Laguna Seca. There is optimism that they will be full time next season.

Just a reminder that the race is on NBC Sunday. If you DVR is like mine, the series setting doesn’t carry over from channel to channel. Double check and set it if you need to. Broadcast time is 4 pm EDT.  There is no prerace. Cars will be rolling when the program begins. 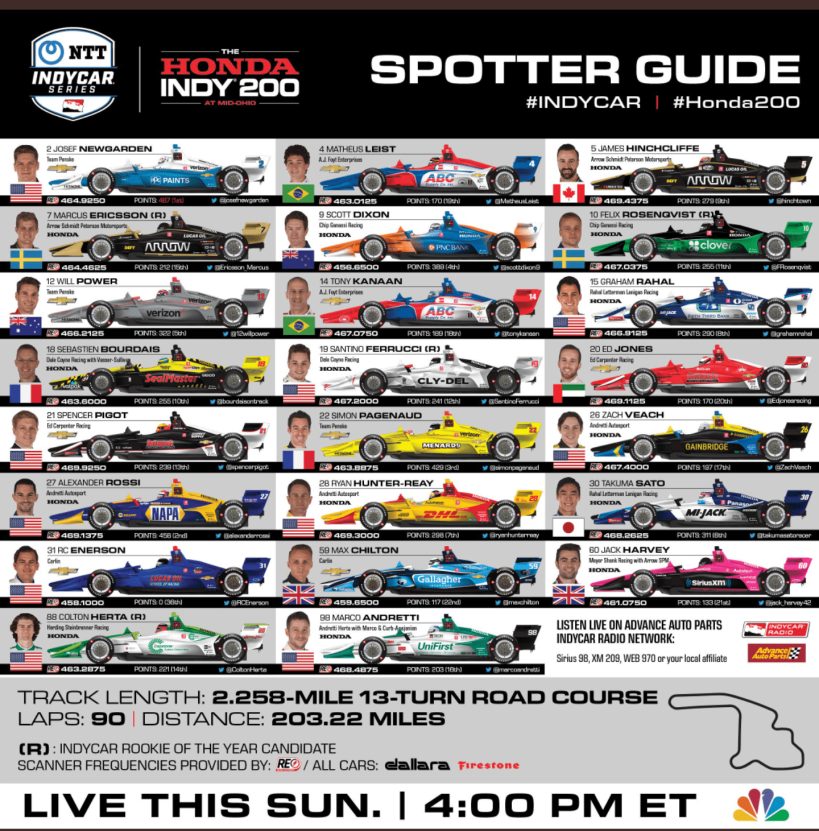