Per Dave Furst on Twitter- Track management said yesterday’s crowd was the biggest since Indycar returned in 2007. I don’t doubt it. It seemed like a bigger crowd than previous years.

This was the first Ganassi 1-2 finish since 2015 when Dixon and Tony Kanaan went 1-2 at Texas Motor Speedway.  I didn’t think it was that recent.

The race really needs to begin at 2:30 instead of 4. Once again, I wasn’t asked.

The first photo below shows Sato next to Ericsson and Hinchcliffe just before contact. Sato started three rows behind them. how did he get next to them so quickly and avoid contact with cars in between? All photos are mine. 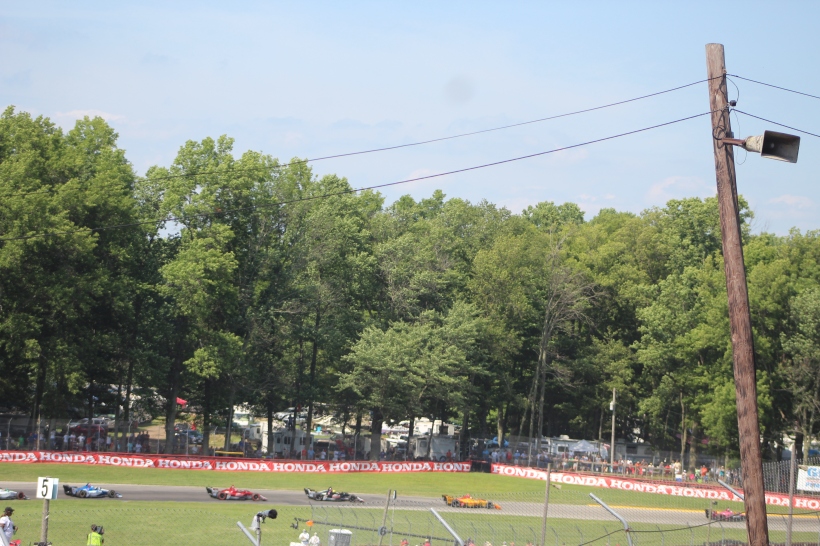 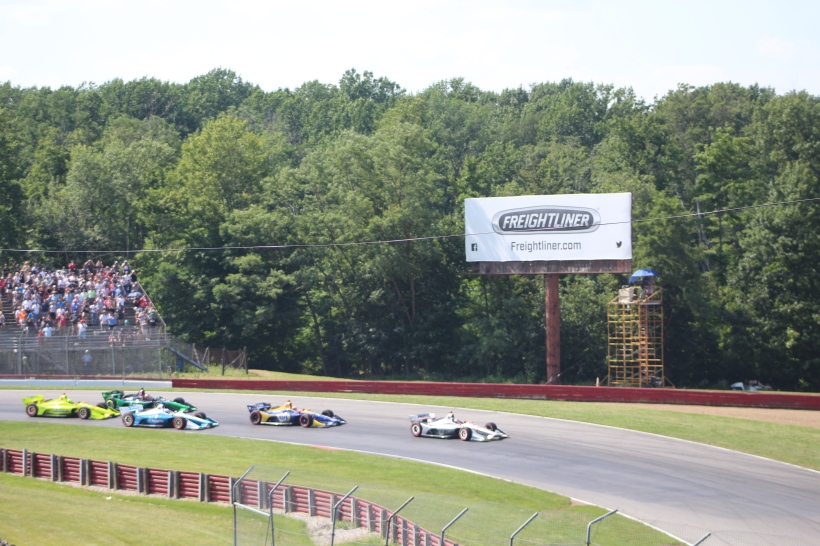 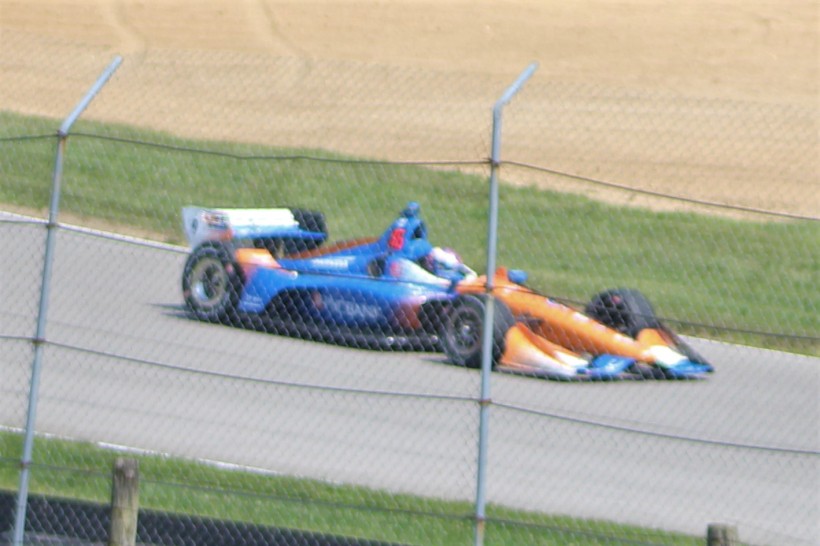 That was one of the most entertaining Mid Ohio races I’ve ever seen. There was lots of action and passing in the esses.

Will Power must have nightmares about Felix Rosenqvist coming up behind him. He passed Power twice today and also got by Power at St. Pete.

Speaking of Rosenqvist, he had the drive of the day.

Who would have won if the race went 95 laps?

Horrible start of the day both Arrow Schmidt Peterson cars.

Rossi doesn’t seem to be bale to catch Penske cars. He didn’t seem to have anything for Power.

Josef Newgarden’s spin out dented his points lead significantly.  He still has a lead he can easily maintain with his usual results.

Dixon is the fourth multiple race winner this year.  Four drivers have won 11 of the 13 races.

There were some good battles between Spencer Pigot and Colton Herta all day. They seemed pretty equal in speed all weekend.

I love watching cars go side by side through turn 5 at Mid Ohio.

Look for my full race report on Wildfire Sports tomorrow.  I have two special features coming up this week. 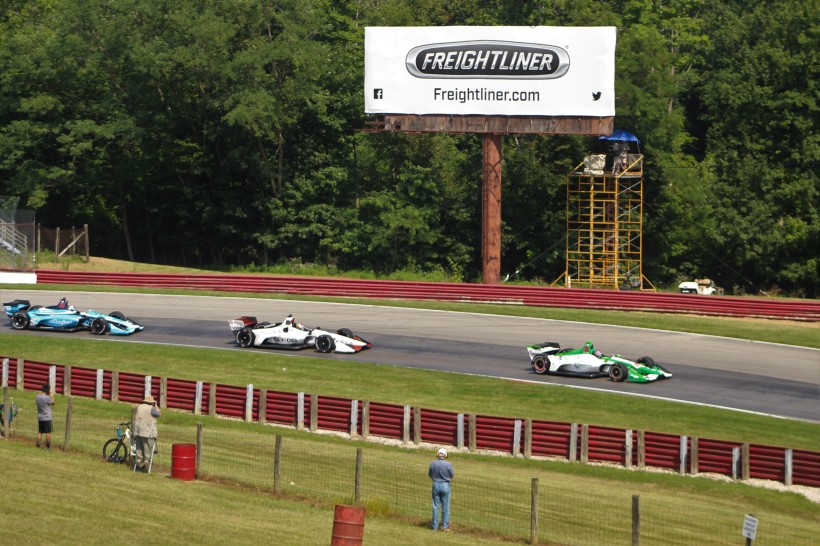 Colton Herta led his third session of the weekend, recording a time of 1:05.7048 in the final warmup before this afternoon’s Honda Indy 200.  Spencer Pigot was second jus0.06 seconds behind HeHarding Steinbrennerrta. Pole sitter Will Power finished seventh. Alexander Rossi, who starts alongside Power in row one, was third fastest.

The session was green the entire time. Many teams used part of the time to scuff in  red alternate tires. Sebastien Bourdais ran the most laps, 25, and Marco Andretti ran the fewest, 17.

Tire choices will be announced shortly. 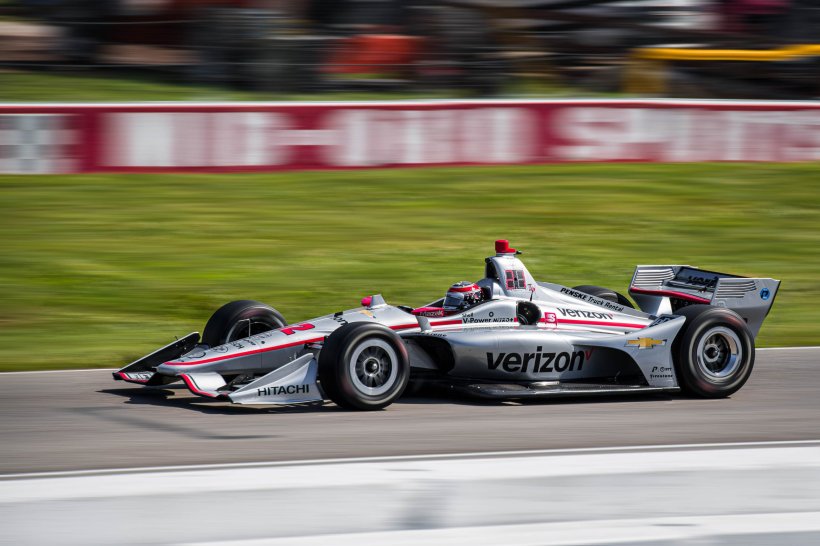 We are ready for Round 13 of the NTT Indycar Series, the Honda Indy 200 at Mid Ohio. Yesterday’s qualifying will make this an interesting race. Can Will Power break his winless streak?  Can Alexander Rossi gain ground on Josef Newgarden? How aggressive will Rossi be at the start? Will a two or three stop strategy lead to victory?

Power said that he is planning on three stops. Rossi used a two stop strategy last year on his way to a convincing win. Teams may not decide until after the noon warmup. The heat may be a factor today as well.

Six of the top ten in final practice failed to advance in qualifying. Santin Ferruci, Graham Rahal, and Spencer Pigot didn’t get out of Round 1. Pigot was second fastest in the morning practice.  Colton Herta, who led the last two practices, Ryan Hunter-Reay, and James Hinchcliffe fell out in Round 2.

Power ran two laps at the end of the Fast Six on reds. He had a slower first lap, saving his tires for the  final circuit. He beat Rossi by 0.38 seconds.

Sebastien Bourdais made it to the Fast Six after flirting with it for the last few races. he has been a consistent Round 2 member this season.

The race is on NBC. You may need to set your DVR.

Back after the noon warmup and then after the race with Quick Thoughts. Look for a ful race report on Wildfire Sports. 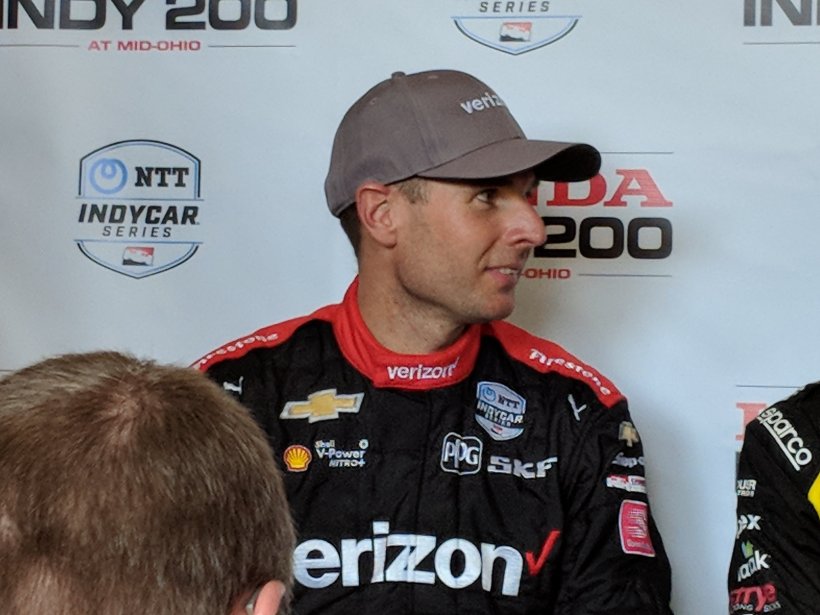 I sure didn’t see this pole coming. Power’s season has been difficult, and he has been out of the conversation for most of the year.  He seemed almost as relieved after qualifying as he was after winning the 500 last year.

Rossi can take consolation that he is starting ahead of Newgarden this race. The first turn after the green will be interesting.

Power’s pole takes a point away from all the championship contenders.

Disappointing qualifying for Colton Herta and Spencer Pigot. Neither made the Fast Six. Herta led the last two practice sessions. Pigot was second quickest this morning.

A Ganassi car made the Fast Six, but not the one I expected. Felix Rosenqvist had decent times in practice, but was 11th overall. He had also had a couple off track excursions. Scott Dixon looked as if he had recovered from his early weekend struggles.

Rossi said he hasn’t had time to think about his renewal with Andretti yet. I still think he will win the race tomorrow.

Bourdais has been a regular in the Second Round of late. It would be great to see him get a pole this year.

All three Arrow Schmidt Peterson cars got to Round Two.  James Hinchcliffe, Marcus Ericsson, and Jack Harvey all advanced. This is Harvey’s first race since Road America, which makes his advancement more impressive.  I would love to see what that team can do full time. Harvey made the Fast Six at the Indycar Grand Prix and finished third.

Tomorrow looks to be the hottest day of the weekend with temperatures around 90 degrees at race time. It should make for an interesting race.

Power said his team is planning on three stops in the race.

Power felt that he would eventually get another pole. “It just got the point where God said, ‘Let him have it.’ ”

Back later with a full qualification report. Thanks for following along today. 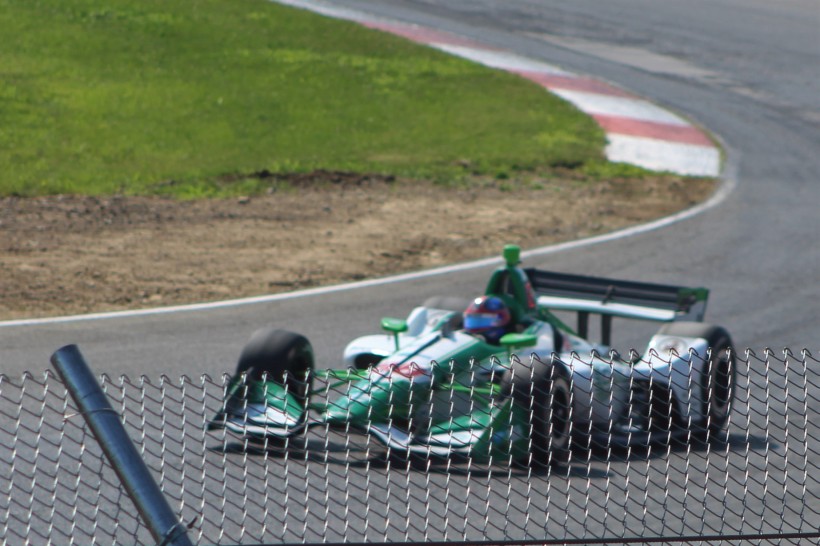 Colton Herta picked up where he stopped yesterday afternoon, leading the NTT Indycar Series final practice session this morning. The results of this session determine the   groups for the 2:35 pm qualifying rounds.  Herta will lead Group 2 in Round 1. Group 2 will also include Alexander Rossi, Josef Newgarden, and Sebastien Bourdais. 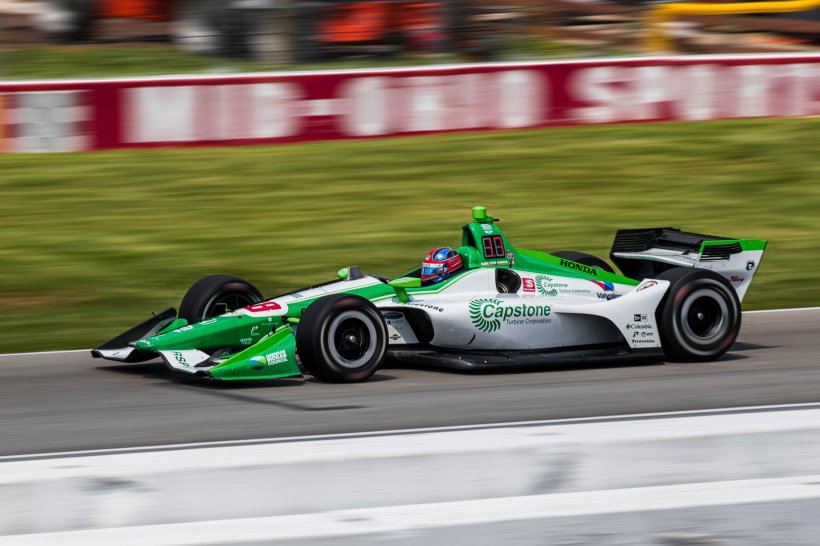 Andretti Autosport has announced a media availability at 12:30 today.  Could Silly Season come to an abrupt end?

Noticed some improvements at the track yesterday. The stairs leading up to the keyhole have been replaced with a new wooden staircase. It looks nice. A new grandstand is at the exit of turn 2. I understand it was put up for the ARX event earlier this year. I might check it out during this morning’s practice.

Some questions for today:

Can Colton Herta win his second pole of the year?

Will Alexander Rossi have a better day than yesterday?

The Pit Window
Blog at WordPress.com.