After a frustrating stretch of races, Scott Dixon returned to form this weekend with a completely dominating performance. He led all but one practice/qualifying session, sat on the pole, and controlled the race from start to finish. Dixon’s lead grew to the point that he was exiting turn 11 as Max Chilton, in second at the time, was entering turn 9. The win is a bit of a consolation prize for him. Dixon is tied with Helio Castroneves for third in points, but cannot catch leader Simon Pagenaud  for the title.

The entire weekend was better than I expected it to be.  So much was against this event.  Indycar did not announce it until May when the Boston street race was cancelled leaving a huge hole in the schedule. Thanks to the efforts of Jay Frye and Watkins Glen president Michael Printup,  a deal came together rather quickly.  Would any fans show up? Would the race be any good? Fans were excited to have Watkins Glen back on the schedule, but it was Labor Day weekend. Many people probably had some type of plan already moving forward.

Attendance both Saturday and Sunday exceeded my expectations.  Granted, it was still a small crowd, but given the circumstances, a very respectable turnout both days. It is a good baseline to grow the event from. Some  grandstands had quite a few people in them. I heard 600 campsites were sold. There were plenty left. I did notice as I left the track that the parking are behind the Argetsinger Grandstand, outside the esses, was full.

The race was better than anticipated as well. I thought we might see two full course cautions widely spaced.  There were two very close together and another one near but not close enough to the final pit window. This made the end a fuel saving race. No one is better at winning that game than Scott Dixon. As for the fuel gamblers, Conor Daly just made it to the finish for fourth place,  James Hinchcliffe could not finish the final lap, dropping from second to eighteenth. What a rough ten days it’s been for Schmidt Peterson Motorsports.

The Track and Its Surroundings

Watkins Glen International sits atop a mountain. The views are stunning.  Mountains dressed in greenery are visible for miles.  The track itself has deep drop-offs and and tree lined sections. Somehow, Indycar has managed to add the two most beautiful tracks, Road America and Watkins Glen, to the schedule in the same year.

Getting around the track was fairly simple.The infield is mostly flat. Roads are clearly marked and they all have names. I either walked or drove my car to a new spot if my destination was a really far walk. Some campers brought their bicycles to use. The track provided golf cart shuttles, some for fans with mobility challenges.  Several times as I was walking to the paddock, a golf cart  driver would stop and ask if I would like a ride.

Food choices were fairly standard track fare.  I thought the prices were reasonable.  There seemed to be enough stands open to accommodate the crowd.

I visited with a friend who was camping for the weekend.  I had heard from some other people that the camping prices were a bit high. I have never camped at a track, so, I have no way to compare. One person said $480, another said $600.  The camp sites are clearly marked in several ways.  There are street signs with a range of sites along the road, E200-220, example. There is a laminate placard with the site number at the spot. Some site had the number burned out of the grass. My friend told me the number of her campsite. I found it easily. Each campsite had a small firepit available.

After a week off, Indycar goes to Sonoma for The GoPro GRAND Prix to end the season.  it will take a full catastrophe for Pagenaud to lose the title. There is now the uncertainty of Will Power’s ability to race.  He has another concussion evaluation this week. He might miss this week’s test at Sonoma. If he can’t race,  the championship goes to Simon before the race.

I will end with some more photos from the weekend. The shots of the cars going through turn 5 does not do justice to the speed they carried through here. The other pictures are of the view from the track. 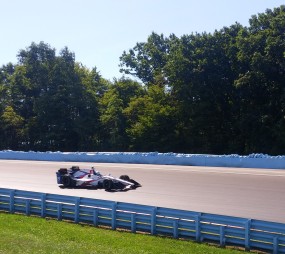