It’s like baseball’s Spring Training, only with race cars. The open test at Phoenix is reason enough to keep racing there. All the teams are there in their new liveries and they are practicing. This year’s test session was even more important since it was the first major workout for the new aerokit. I was especially looking forward to finding out how the new package performed in traffic. I have read many conflicting reports, but based on what I was able to watch and putting all I’ve read together, it seems Indycar is on the right path.

Three things I heard give me some hope for better racing:

The car is a handful to drive.

Drivers are lifting in turns 1 and 3.

This year driver skill will truly be on display.

Keep in mind Phoenix has never been known for passing. It has always been a one groove track. That doesn’t mean we will see the same type of race we saw the last two years. The new aero package allows a trailing car to get closer to the car ahead without upsetting the handling as much. Tire degradation will also play into passing. Firestone may still be working on a better tire design. They are still learning how the new kit works, too. I’m hopeful of a better race.

I think the speeds will be close to last year and there will be some wild action near the end of a stint.

I like most of the new liveries. There are fewer blue and white cars, which is a welcome change from the grid at the end of last year. The one livery I’m not crazy about is the 26,driven by Zach Veach. I think it’s rather plain and dull.  Some of the best:

Ed Carpenter has a distinct color for each car. Spencer Pigot’s number 21 is a light green, and the shared number 20 (Jordan King on road/street/Ed Carpenter on ovals) is black.

A.J. Foyt Racing retains the basic color scheme but the 14 Tony Kanaan drives has red as the main color on the nose and the 4 of Mattheus Leist has blue.

The Carpenter and Foyt teams were the most difficult to distinguish last year. I’m glad to see there will be some differentiation this season.

Scott Dixon’s new livery is growing on me. I was put off by it when I first saw it. I thought the blue and the orange should be reversed, but after seeing the car on track, I like it the way it is. 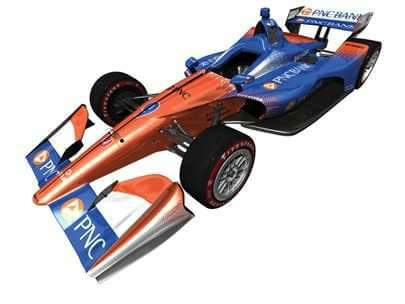 Sebastien Bourdais’s number 18 is probably the wildest of all. The black and yellow stripes give the car a menacing look. It reminds me of a shark.

Scott Dixon drove the car with the new windscreen attached in its first on track test Friday night. The results were quite positive in the three lighting conditions- daylight, dusk, and under the lights. Dixon reported no distortion, but did complain about the heat in the cockpit. Some type of ventilation will have to be worked out. He also said there was no buffeting and that it was quieter in the car. Indycar is planning a test for he windscreen on one of the early season street courses. That type of course is my biggest concern for this device. the field of vision is limited with the tight turns and walls on a street circuit. More advanced ballistics test also will be conducted. The screen is at least a year away from full implementation.

Danica has a Deal to Do her Double

Danica Patrick announced late last week that she has a deal to drive in the 500. The team and terms were not announced. During a press conference yesterday in Daytona, Danica accidently mentioned that she will be driving for Ed Carpenter Racing.

Ed Carpenter Racing will give rookie Jordan King an oval test this week. King was hired to drive the shared ride on the road and street circuits. The announcement fueled speculation about a third car for ECR in the 500, but the possibility of Danica Patrick in the third car would seem to end that thought. Another thought- Is this Ed’s last year in the car and is King going to be full time next year? That would be surprising considering the experienced talent waiting for a ride. I would think they would want to see how the first part of the season goes before making a long term commitment.

ABC announced the same broadcast booth for their telecasts with Alan Bestwick, Eddie Cheever, and Scott Goodyear. The pit reporters remain the same. Retaining Cheever and Goodyear tells me that they have no interest in improving their telecasts. I wonder if they are truly interested in continuing their relationship with Indycar. They did upgrade their 500 team with the addition of Nicloe Briscoe.

The track build for the St. Pete race began Tuesday, and the weekend schedule came out today. We are 25 days away from race day and 21 days away from the first practice.