Conor Daly and Michael Andretti revealed the car Daly will drive in the 103rd running of the Indianapolis Motor Speedway today. The car is mostly matte black, touches of blue and hits of various fighter jets. I really like the shark’s teeth behind the front wheel.

“It’s been a dream of mine to drive for this team for a long time,” Daly said. Getting to practice tomorrow is “a huge benefit. Tomorrow is day 1,” Daly added.

The unveiling also give those in attendance their first look at the Advanced Frontal protection device which will be on the cars tomorrow and for the 500. The piece is taller than i thought it was. It is very thin. The device does not appear as if it will obscure the drivers’ vision. 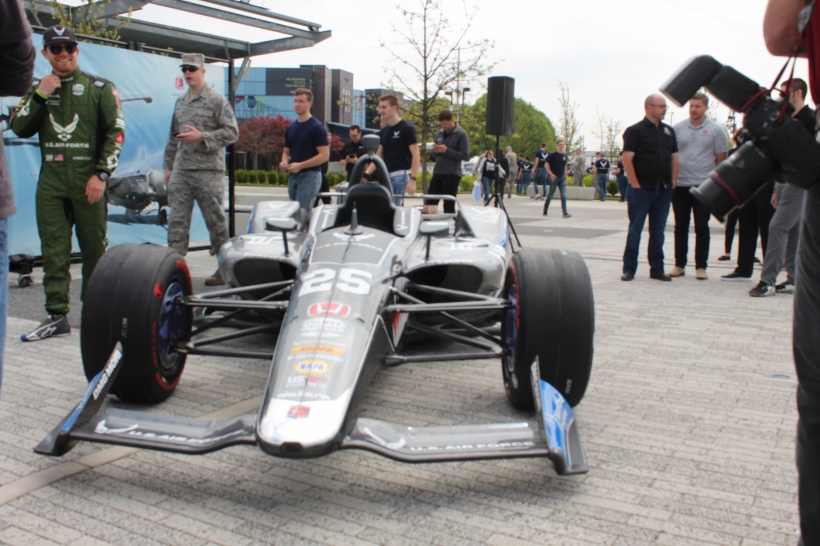 The front view shows the AFP device just in front of the cockpit. I asked Daly how he thought the device would bother the vision. He said he wasn’t sure. The device is on the simulator, but he wants to see what it’s like when he actually drives the car.

A closer look at the AFP

Tomorrow’s test at the Indianapolis Motor Speedway begins with veterans on track from 11-1, followed by rookie orientation between 1 and 3. The final round of testing begins at 3 and goes until 6. The turn 2 mounds will be open for spectators. the test is also live streamed on Indycar’s Facebook page.

The Pit Window will have updates after each session and a full wrap-up on Wildfire Sports Thursday morning.