1977 was an historic year in the history of the Indianapolis Motor Speedway and the 500 Mile Race. It was the first year a woman made the starting field. There was the first four time winner. It was the first time someone other than Sid Collins would anchor the Race Day broadcast. It was the last win for a Speedway legend. Sadly, it was also the last race for Tony Hulman, who would die in the fall.

Collins died on May 2, so the program does not include tribute to him. Paul Page debuted as the new anchor for the IMS Radio Network.

The program for 1977 seemed to have a penchant for clairvoyance. Hulman and A. J. Foyt were on the cover. It now seems ironic that they rode around the track together  in the pace car after the race. Other parts of the program continued the ability to see the future.

In a brief blurb about five of the rookies entered, the article wonders if a future winner might be in the group. Rick Mears was one of the rookies profiled. Of the drivers listed, only Bobby Olivero made the 1977 race. Another feature on a rookie is entitled “Janet Guthrie-First Woman in the 500?”

A piece by John Hughes titled “World’s Most Exclusive Club, highlighted the former winners in the race. A new, even more exclusive club would begin on race day.

Overall, the 1977 program is one of my least favorite. I find the graphics cartoonish and the print small. It continued a trend that began in 1976 when the cover departed from the traditional flags and wing and wheel designed that had graced the covers since the early 1950s. the programs are beginning to lose their soul, and I’m not sure they have ever recovered.

There are still the traditional elements of the program that I always seek out immediately- the Order of the Day, the Entry List,  and the summary of the previous year’s race. The Ortder of the Day was the usual. The “Star Spangled Banner” 10:44, “Gentleman, Start Your Engines” at 10:53, followed by the pace lap-s and the start. The command would be slightly modified this year. Some details from this page:

The pace car was an Oldsmobile Delta 88 deriven by James Garner.

Victory banquet tickets were $15. I have been to the last two banquets. I can assure you they cost a bit more now.

Continuing with the cartoonish theme, the starting lineup insert format thankfully didn’t last long. Before this year, the lineup simply listed names, car numbers and names, and speed by rows. For 1977, the y tried something which didn’t work: 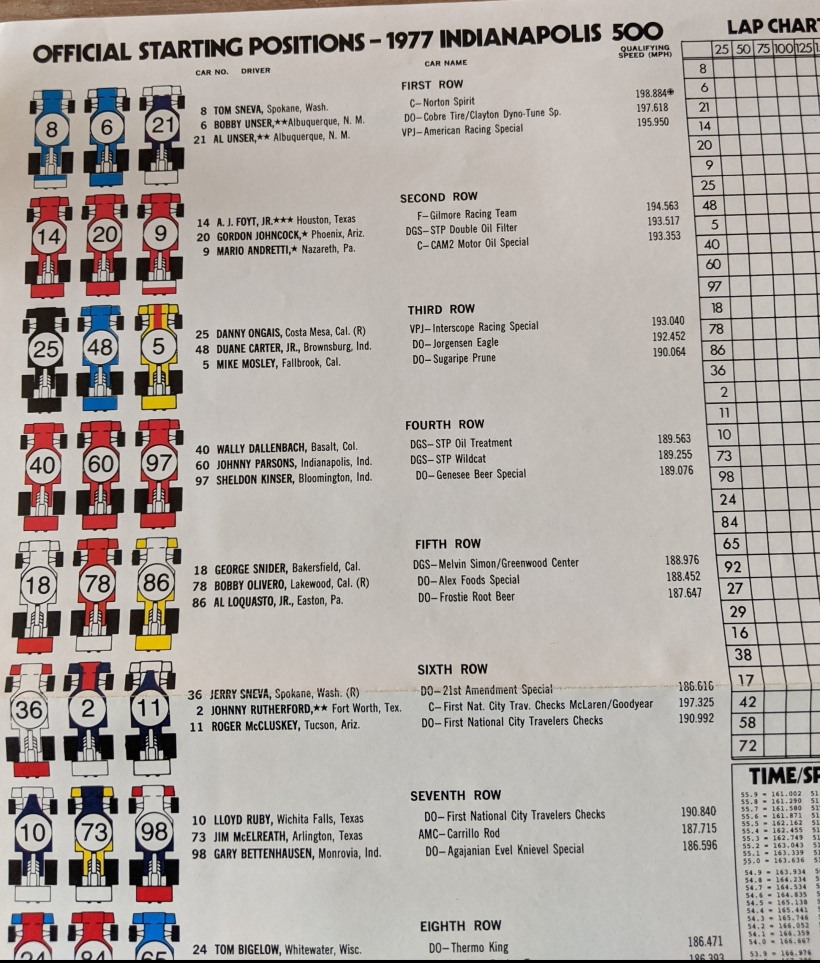 The car colors are correct at least.

I also like to look through the programs for ads from companies that no longer exist  or participate in the race. In 1977, there were ads for Raybestos, Stark & Wetzel, and AyrWay.

The race featured the first woman starter, Janet Guthrie, who qualified after struggling for most of the month with the car. She started 26th and retired with timing gear issues after 27 laps.

Gordon Johncock dominated the race, leading 129 laps, but a failed crankshaft on lap 184 gave the lead to Foyt, who held it for his record fourth 500 victory.