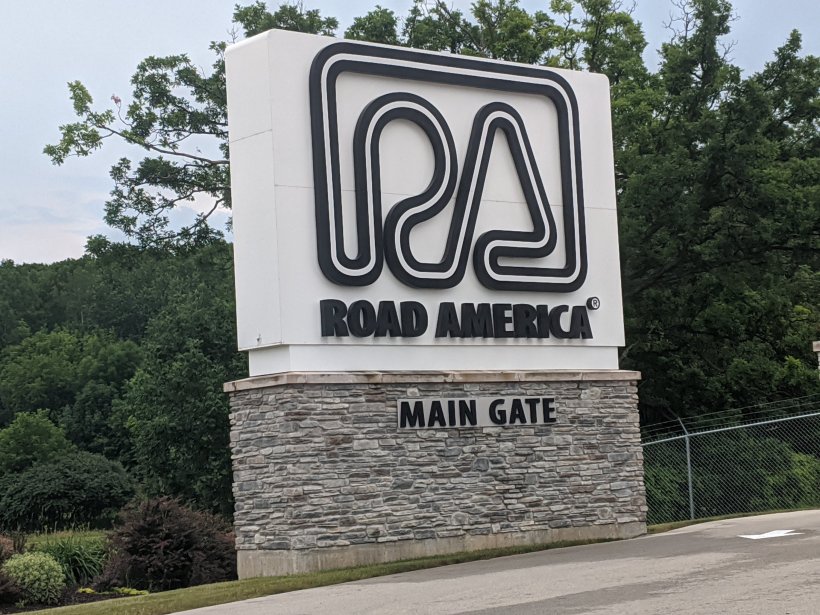 Good morning from Elkhart Lake.  Due to social distancing my seat in the media center  is five miles from the  track.  I can barely see the cars.

It will be a pleasant day at the track with a high of 81 predicted for mid afternoon. Rain chances drop to 20% at 8 am then are 15% or less the rest of the day. Last night we had some storms. Milwaukee was under a tornado warning early in the evening. The weekend still looks good.

I’m looking forward to seeing cars on track again.  I will also be observing track practices to see how Road America’s plans have worked out in real time. Look for my thoughts this evening.

Today is the day for the Road to Indy to have the track all to themselves. It’s nice when they get a full day on an Indycar weekend.

Road America is the crown jewel of road courses in North America. Indycar returned to the 4.048 mile course in 2016 after a nine year absence.  It’s a shame they ever left. This place is designed for Indycars.

The REV Group Grand Prix doubleheader this weekend begins a crucial part of the season for Alexander Rossi and the Andretti Autosport team. Rossi, a preseason title contender, sits 23rd in points after two dismal performances at Texas and Indianapolis. Mechanical woes in bot races left him out of consideration for a good finish. His DNF at Indianapolis last weekend really hurt.  The good news for Rossi is he returns to the track where he dominated the race last year, winning by 28 seconds.  Hew needs to win at least one of the races and have a top five in the other one to begin his steep climb up the points chart.

While Rossi’s struggles stand out, the rest of Andretti Autosport has drivers all over the map. Jack Harvey,whose Meyer Shank team is an associate team of Andretti, sits 17th. Ryan Hunter-Reay also has had some issues in the first two events ranks ninth. Zach Veac looked good at Texas with a career-tying best finish of 4th, but struggled last Saturday. He is currently 6th in points. Colton Herta leads the team, quietly resting in 4th place after two races. Herta won the pole at Road America last year. Rossi beat him to the first turn and no one saw him the rest of the day. If Herta repeats as pole winner, he won’t get beat again. Despite Herta’s standing, he hasn’t been mentioned much. I think that will change Saturday and Sunday.

Another Top 5 for ECR?

One of the nicest surprises in the young 2020 season has been the performance of Ed Carpenter racing drivers. Carpenter was fifth at Texas. Rinus VeeKay placed fifth last Saturday after starting 18th. The rookie moved up 13 places in a race that had just four laps of caution. Conor Daly was in the top 10 most of the day at Indianapolis, but faded to 12th at the finish. Overall ECR has shown a lot of improvement over previous years. Road America will be a big test for their program.

The odds are against Scott Dixon sweeping the weekend and winning the first four races of the year. However, it is not something that would surprise me. The Ganassi team has looked well prepared upon arrival for the first two races. Should he sweep, Dixon will have amassed 50 career victories. We don’t see that very often. Only twice, actually.  Winning  just one of the two races would give the five time series champion a huge advantage for the rest of the year.

After the GMR Grand Prix driver concerns about stagnant air in the cockpit caused by the aeroscreen and their drink  bottle placement heating their drinks has brought about some changes. The water bottle has been moved away from the heat source and he tube has been shortened. On pit stops, the additional crew member assigned to remove aeoscreen tearoffs will also hand the driver a water bottle during the stop. This will allow the drivers to have more water available while they are on track. Some drivers ran out of fluids early last weekend.

I don’t expect conditioning to be a problem at Road America. the track is not as physical as the IMS road course. Who will win? I think Rossi wins one of the races and Will Power bounces back from his pit issues to win the other one.

Push-to-pass parameters: 200 seconds of total time with a maximum time of 20 seconds per activation.

Firestone tire allotment: Nine sets primary, five sets alternate for use during the race weekend. Teams must use one set of primary and one set of alternate tires for at least two laps in the race.

Indycar entered two separate entry lists for the double Header at Road America. There is no difference between the lists. Carlin is once again fielding just one car, the 59 of Max Chilton.

I got to go home today. The Indianapolis Motor Speedway Museum re-opened yesterday, and today I arrived there just after it opened. Things have changed, Guests need to fill out a health screening questionnaire at on eof three stands outside the museum’s doors. Hand sanitizer and pens are provided. There is a bin for new pens and a bin for used pens.

Inside the doors one person takes the questionnaire and another on takes a photo of each guest. Guests may then proceed to the admission desk. Cash is not accepted for museum admission or in the gift shops. Merchandise displays are behind tensor barriers. guests must request a staff member to get an item to inspect.

Once inside the museum proper, the brave new world of 2020 vanishes into the comforting past of racing history. The current exhibit is From the Vault. On the floor are things are not usually shown. Some of the cars are beautiful. The trophy collections, especially that of Rudolf Caraccciola, is outstanding. Caracciola’s widow donated his collection to the museum after his death. The German driver convalesced with the Hulmans after crashing on a practice run in 1946. 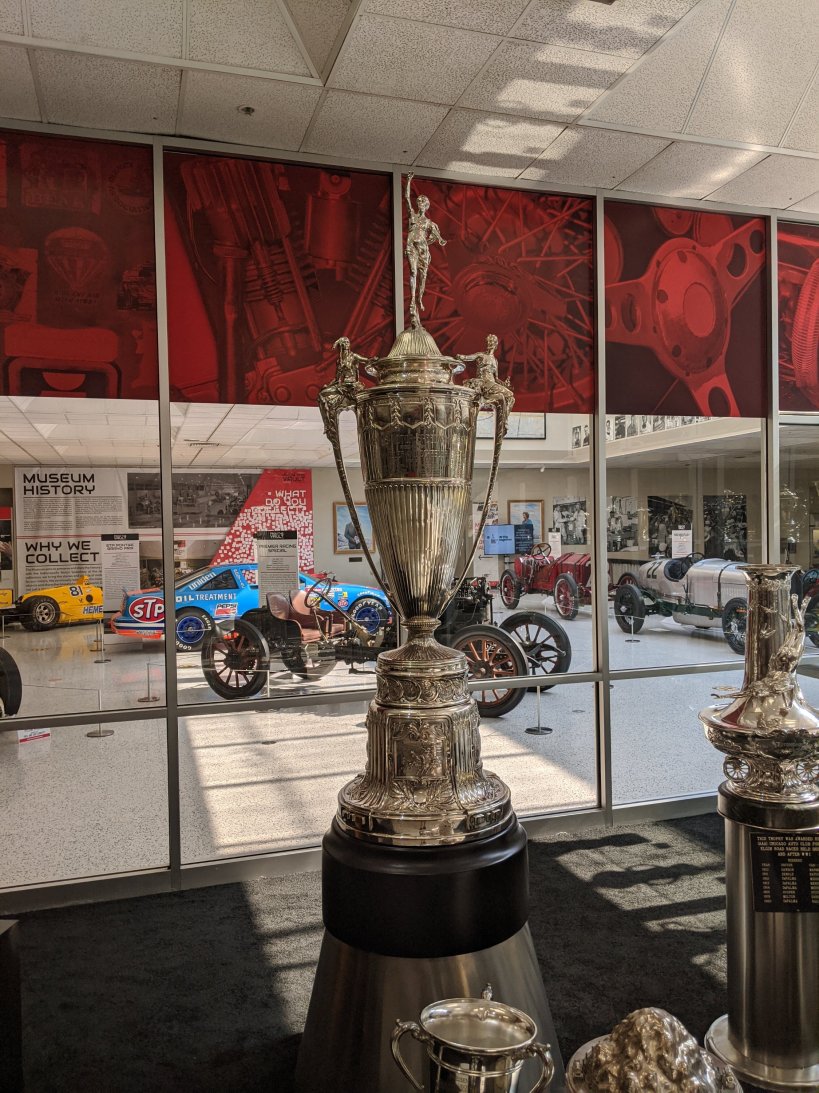 As for the cars, there were some I had not seen in the museum before (not on track either). This stunning beauty was from 1938-1940, driven by Louis Meyer and Rex Mays. 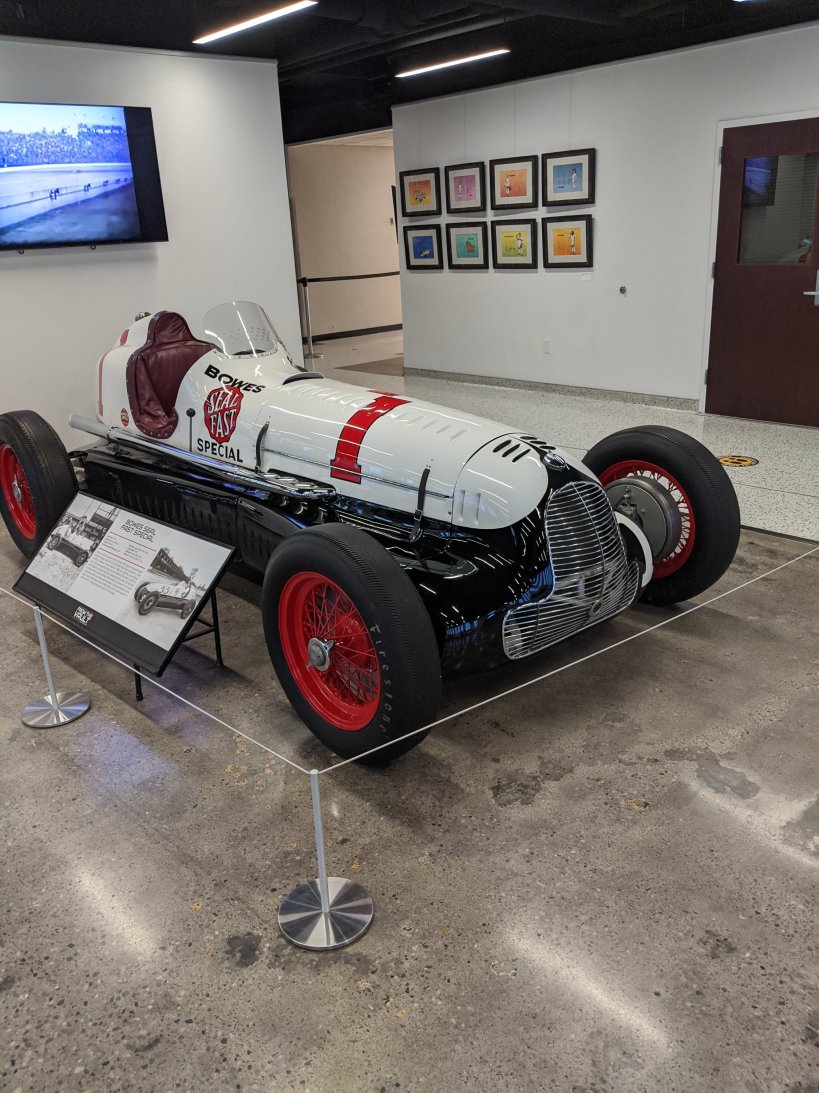 A car that never raced is the Firestone Test car. The car was built solely for tire testing in 1954. it was powered by a Chrysler 331 cubic inch stock block. Sam Hanks, Rodger Ward, and Pat O’Connor drove the car.

The collection is not limited to cars that drove at the Speedway. A 1954-55 Mercedes Benz driven by Stirling Moss and Juan Manuel Fangio is the highlight of the European part of the exhibit.

The W196 finished 1-2 in their first race, the 1954 French Grand Prix. Fangio won the world championship in this car. The fenders were removed for racing at tighter circuits.

A couple of other interesting items were cloth numbers used for scoring the race. An individual was assigned a car to count laps for during the race. the scorer pinned the number to the back of his shirt.

This mallet was used to remove and replace the wheel hubs during tire changes.

I will share more photos next week. My first impression of the speedway when i got out of my car was how bright everything is. It appears layers of dust and grime have been washed away. Even the grandstands look new.  It was great to return to my second home again, just to be inside the grounds lifted my spirits.

Qualifying will follow the format used for the Detroit races. Two groups get 30 minutes each. The fastest driver in each group gets a point and is guaranteed a front row start. the faster of the two is on the pole. the other cars line up behind the leader of their group.

Thursday is reserved solely for the Road to Indy. USF 2000 and IndyPro 2000 each have practice, qualifying, and two races.

Alex Zanardi underwent five hours of surgery yesterday for facial reconstruction and to stabilize other injuries. The surgeries also were to prepare for future therapies.

Zanardi was injured in a handbike racing accident on June 20. He swerved into the opposite lane and collided with an oncoming truck.

Number 54 will have to wait. I have agonized over this decision since IMS announced its ticket plan for the postponed Indianapolis 500. After talking to my friends last night, who aren’t going, I have decided to join them on the sidelines. Earlier i received some advice from a medical professional whom I trust. If attendance had been limited to people from Indiana, I might have leaned more toward going to the race. My concern is fans from the petri dish states like Florida, Texas, and California who might be attending.

I have gone to the last 22 500s. the last time I missed the race was 1997. I have endured extreme cold, tornadoes, and scorching heat to watch this most grand of all races. This year I feel is something much more dangerous than any of those perils.  It will be okay. If the television blackout remains in place, i will travel to another city to watch the race live. If it is lifted, i will watch from my home.

I will still attend practice days and maybe qualifying. Carb Day is iffy right now. The Speedway is requesting people in my age group not attend, but it now seems more younger people are contracting the virus. Maybe they should be encouraged not to attend as well.

I have thought that businesses were re-opening too soon, and this is not the year for an event like the 500 to take place with fans. I miss all sports like crazy, but I can wait. We are starting to see athletes contract the disease even when they are in a somewhat controlled environment.

I am looking forward the 2021 Indianapolis 500 on the traditional May 30 date next year. It still might be the 104th running.

REMINDER: If you have a ticket for the 500, today is the last day to inform the speedway of your intentions. You will not lose your seats for next year or your ticket seniority.

The Pit Window
Blog at WordPress.com.