The Advanced Frontal Protection device  received a formal introduction today before the open test at the Indianapolis Motor Speedway.  Jay Frye explained the concept and  explained why the NTT Indycar Series chose this system. The device will be used on the cars the rest of the season.

Some facts courtesy of the NTT Indycar Series:

Today is the first time the AFP will be used on track.

The device is made of titanium and manufactured by Dallara.

Versions of the AFP have been explored since 2012.

Dallara introduced the device to Indycar in January.

The AFP has been subjected to and passed the same loads as the roll hoop.

The AFP weighs 2.8 pounds with bolts. Reinforcements to the monocoque weigh 2.1 pounds.

Frye said this is the first phase of cockpit protection.

“Sometime in May we will announce the next phase, ” Frye said.

The next phase is for 2020.  Frye explained the reason for the length of the process.

“You can’t just put something on a car without vetting it all the way out,” he said.

The AFP cost $5,000.  Titanium is more expensive than steel, but its lighter weight was the reason titanium was chosen.

As far as the view from the cockpit, this should be a minimal distraction. 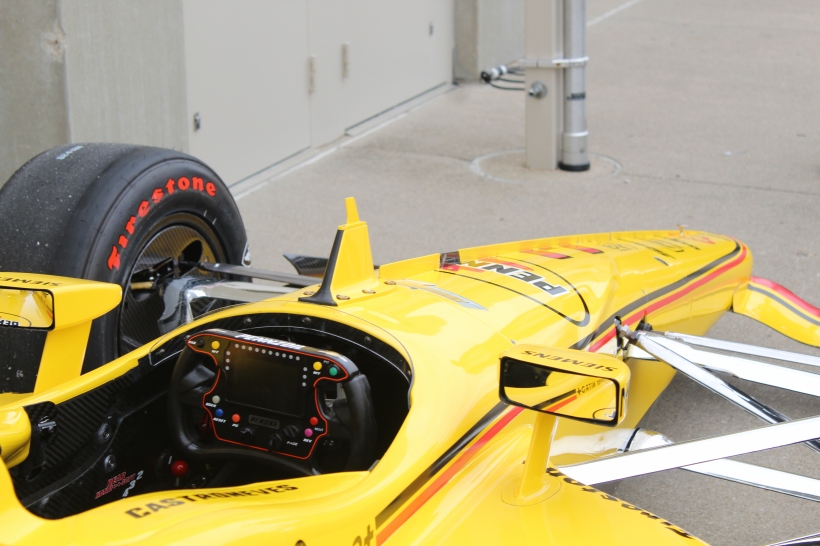 After about 20 minutes of running, the track was closed because of rain. An update will be given n about an hour. Ed Carpenter had the fastest lap at 220.817. I hope to get some photos during the rain delay of som.e of the newer liveries.