Alexander Rossi celebrated taking the points lead yesterday by winning the pole for Race 2 In Detroit. Rossi win he s group by nearly 3 seconds over Will Power. Power has been the strongest Chevy this weekend. He will start third.

Joining Rossi on the front row is Robert Wickens, who led group 1  qualifying. It’s always exciting when Wickens and Rossi are side by side. Scott Dixon, winner of yedteryeste race, starts 5th.

This is the third career pole for Rossi and his second this year. Rossi has won from the pole the two times he’s started first.

The session was run on rain tires, but dry conditions are expected for the race.

I will not post an update after the race tonight as I need to drive back to Indy. Thoughts on the weekend will he up tomorrow. Also look for a wrapup on wildfireradiosports.com on Tuesday.

It’s not Indycar, but many current and former Indycar drivers will be driving in the Rolex24 at Daytona this weekend. IMSA has shown steady improvement since Grand Am and the American LeMans Series merged in 2012 and the new series began racing in 2014. The series begins 2018 with new teams, a very large prototype class, and some new full time drivers. Here is a look at the teams with Indycar connections.

Roger Penske starts a full time entry into the series with two Acura prototypes. Former Indy 500 winners Helio Castroneves and Juan Pablo Montoya each drive one of the cars. Castroneves is in the number 7, and Montoya is in car 6. For the Rolex, Graham Rahal will co- drive with Castroneves and Simon Pagenaud will team with Montoya. Ricky Taylor is Castroneves’ full season teammate. Dane Cameron is Montoya’s co-pilot for the full season.

Chip Ganassi continues to field Ford GT cars in the GTLM class. Scott Dixon and Ryan Briscoe drive number 67 this weekend. Sebastien Bourdais will be in the 66.

Bobby Rahal’s BMW team, cars 24 and 25, race in the GTLM class. Connor DePhillippi is one of his drivers.

Spencer Pigot is back in the 55 Mazda with Team Joest in the Prototype class.

Fernando Alonso makes his endurance debut in car 23 for United Autosport. The car is a Ligier Prototype, one of ten LMP2 cars.

Two drivers from Indy Lights of note- Pato O’Ward, who returns for a full Indy Lights season this year, will drive the Performance Tech number 38; Felix Rosenqvist, who had a brief run in Lights and is the current pints leader in Formula E, co-drives the Jackie Chan entry number 37.

I plan to watch the Indycar test at Sebring on Wednesday before going to Daytona. 15 cars are scheduled to test, including newcomers Carlin and Shank. It should be a busy day.

The Cadillacs of Wayne Taylor Racing and Action Express will be strong again. I’m interested to see how strong the Penske Acuras are in their first race. They should be contenders later in the year. Ganassi Ford GTs will likely dominate the GTLM class. The GT Daytona class is usually wide open, but I’ll go with the Porsche 911 team for the win.

I hope to post about it Wednesday night and provide update from Daytona this weekend.

The SCCA presented a great show last weekend at the Indianapolis Motor Speedway. After practice and qualifying days, 24 races took place over 3 days. The runoffs are the SCCA’s national championship events. If you didn’t care for the type of car in one race, the next class might be more to your liking. There  were sports cars, formula cars,  and prototypes each with several classes. I heard that close to 1,000 cars were entered. At breakfast Sunday morning I overheard a representative from Hoosier Tires say they brought 6,700 tires for the weekend.

The program runs very efficiently. Each race is 19 laps or 40 minutes. While the last race’s winners are celebrating on the podium, cars are lining up for the next race. Basically, there was one race each hour, with a break for lunch.

There was good, hard racing throughout the fields. Only a few times did the cars get strung out. The formula Vee race was very entertaining with the lead switching  several times.

The only disappointment was not being able to find a program with a schedule of races or  any information about the classes of cars or the drivers. The SCCA website did not provide anything except the schedule.

This event will not be an IMS perennial as the SCCA rotates the runoffs. I hope it returns soon, though. It was a refreshing end to the racing season and allowed me one more day this year at the Greatest Place on Earth. Below are some more photos from the weekend. I’ll be back next week with some Indycar news. 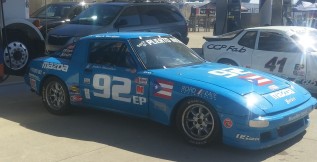