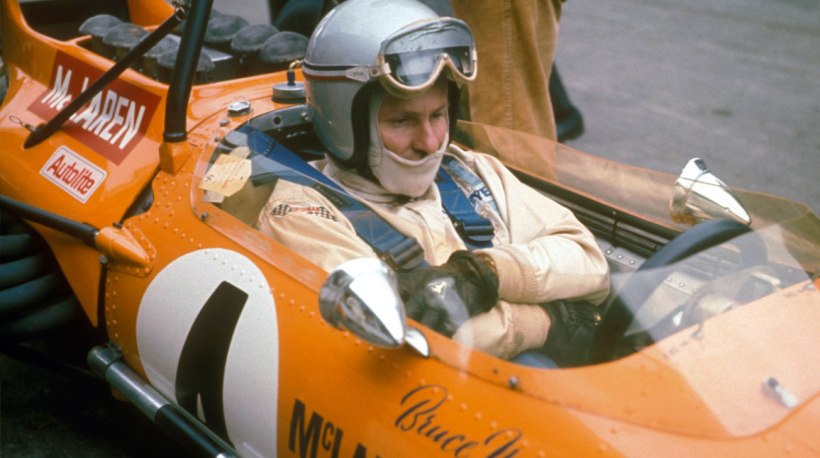 Just one more lap before lunch. Bruce McLaren, always looking for more from himself and his car, wanted to try a different downforce level.. He left the pits but didn’t return that day in June 1970, ending a meteoric rise from champion driver to successful car builder. A view of the accident scene comes at the end of the documentary, McLaren, a film making sporadic appearances in the United States. I had the good fortune to see it Thursday night.

The film chronicles McLaren’s life in chronological order from his humble beginnings in New Zealand. Bruce knew he wanted to be a race car driver by the time he was 5 years old. When he was nine, he developed Perthes disease, a disease that causes the head of the femur to lose blood flow and die. As a result his left leg was shorter than his right one. McLaren was bedridden for nearly 2 years as doctors tried to strengthen the hip and lengthen his left  leg.  While the hip got stronger, his leg did not get longer. Mclaren walked with a permanent limp.

He went to Europe to drive F2 in 1958 and won his first Formula 1 race the following year, the U.S. GP at Sebring. At the time McLaren was the youngest F1 winner in history, a distinction he held for 44 years. He drove as a teammate to Jack Brabham for Cooper.  Brabham won the World Championship the following year and McLaren finished second.   Both drivers  left Cooper and eventually each built their own Formula 1 cars.

McLaren’s greatest success came in the Can Am series.  In 1969, McLaren-built cars won every race on the Can Am schedule. The three McLaren  cars swept the podium twice that year.  Dennnis Hulme and Mark Donohue were McLaren’s teammates that year.

The movie contains interviews with many racing greats including Mario Andretti, Dan Gurney, and Chris Amon. McLaren’s family also appears, lending a personal view of the man. We also hear from several engineers and mechanics, mainly Robin Heard, who came to work for McLaren after helping design the Concorde supersonic airplane.  Many of the airplane’s aerodynamic principles, and some of the same materials, were applied to the cars.

My favorite segments were the vintage racing footage. The race films contain shots of Graham Hill, James Hunt, Jack Brabham, and many other drivers of that era.  We see Le Mans in 1966, Monaco in 1958, Sebring in 1959, and Spa in 1968.  Several things in the films stood out. Grand prix races used to start 3 wide and both F1 and F2  raced at the same time just as sports cars race today. It was great to see the traditional Le Mans start again, with drivers sprinting across the track to their cars. How would that work today?

Several McLaren home movies brought a personal touch to McLaren’s life. He would send film of his European races home and the family and their friends gathered to watch. I also enjoyed the movies of Bruce with his wife and young daughter.

McLaren is one of the best documentaries I have seen on any subject. It is a new, important contribution to preserving racing history. I’m hoping the movie returns in general release. Had there been a second showing last night, I might have stayed for it.  Look for its return, and go see it.

Just when I think I’ve crossed most items off my bucket list, another thing to add pops up. Friday afternoon at the Indy Film Fest I saw The Race of Gentlemen, a documentary about a race/vintage car and motorcycle festival in Wildwood, New Jersey. It’s not really a race as much as a festival celebrating the hot rods of the 30’s and 40’s. Remember the street racing scene in Rebel Without A Cause?  That’s what this is, kind of.  This race ison a beach.

Created by Mel Stultz after he became head of The Oilers, a club dedicated to preserving pre-World War II cars and motorcycles.  The idea is to keep racing in its purest form. All parts used on the cars must be either pre-war or early post war vintage.

The car must be a 1934 or older model and American made.  Engines from 1948 or earlier are allowed, along with 1949 and 1953 Ford flatheads. No 1949 overhead valve engines are allowed. The newest running gear allowed is from 1953. Cars run only on gasoline. They are stripped down for racing- no fenders.

There is a competition class and a couple exhibition classes. Cars race two at a time along a strip of beach. The starter waves a flag or sometimes just a cloth.  The New Jersey race is in June, and they have added another race in California in October. The event attracts entrants from across the country.

The film mainly interviews the car owners telling their stories of how they got interested in the hobby and how they obtained the car they brought. Some show up with several vehicles and a team of drivers.  The film opens with Mel Stultz telling the story of how the event was created.  There is footage of race action, some from on board cameras.

The event recreates the atmosphere of  a 1940’s carnival with tents and period details. Racers and spectators dress in period attire. It looks like a fun event to attend.  One racer lamented the growth of the weekend, complaining that the increased number of entries has limited the number of times each car can run.

What came through in the interviews was the owners’ love of the cars of the past, their passion to preserve theses machines, and their joy in being able to race them.  I wish I knew enough about mechanics to do this type of thing. I’ll just admire the work of others.

For those of you who love vintage cars, like me, the film  was great.  It was the best of  the three documentaries I saw at the festival.  I had never heard of this group or this race before. For more information about the event, visit the site http://theraceofgentlemen.com. The group’s history is outlined and there is a great photo gallery. If the film comes to your area, check it out.

Tuesday is the day. We get the first look at next year’s speedway aerokit at IMS. Juan Pablo Montoya and Oriol Servia will test the car for the first time. Viewing is allowed from the turn 2 mounds by the museum.  The first road course test is at Mid-Ohio on August first, two days after the race.

It was great seeing Sebastien Bourdais at Toronto. He is planning to test next month and is hoping to race at Watkins Glen and Sonoma to finish the year.

There is more speculation that Andretti will be a Chevy team next season. That sets all sorts of drivers in motion, particularly Takuma Sato, and likely Alexander Rossi. It may force a Honda team to take Sato instead of a driver they may have had in mind. I certainly hope there are at least two new teams next year, although I’m only optimistic about one.

Marotti racing will again team up Schmidt-Peterson Motorsports for Pocono, Watkins Glen, and Sonoma. They will be supporting the 7 car.  Who will drive for them is unclear, as the Mikhail Aleshin situation is still a bit murky. Aleshin is scheduled to drive at Mid-Ohio next weekend, but after that, we will see what happens. There is no mention of who is driving the car at Gateway.

I’ll be back later this week with a review of Kiss the Bricks and also the mildly anticipated Mid-Ohio preview. I am quickly running out of chances to pick the correct winner.